Is there a place for data journalism in Caribbean Newsrooms? Journalists see value, but face challenges 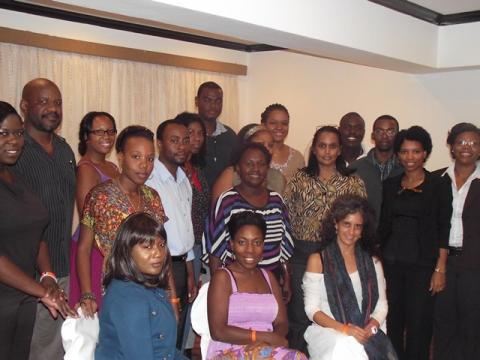 Data Journalism has been described as the future of media by no less a luminary than Sir Tim Berners-Lee. As such, regional media houses and professionals need to embrace this new paradigm especially in a world where social media giants such as twitter and Facebook have begun to dominate the media landscape, and the internet has democratized and globalized the access to, and accessibility of information.  Yet the question remains: Are regional media houses and editors ready for this challenge?

A recent survey conducted by the Caribbean Open Institute followed up on fifteen journalists from 7 Caribbean countries: Antigua & Barbuda, Dominican Republic, Haiti, Jamaica, St. Kitts, St-Vincent & The Grenadines and Trinidad & Tobago; who had participated in a two-day Data Journalism workshop back in 2013.  The workshop, organized as part of a Data Journalism Fellowship Programme, was held at the Hotel Coral Costa Caribe, located in Juan Dolio, Santo Domingo in the Dominican Republic and the survey results have been telling.

The Data Journalism Fellowship Programme and its impact

The workshop featured Giannina Segnini who leads a team of journalists and computer engineers at La Nacion, Costa Rica’s newspaper of reference and the specific objectives were:

Over the intense 2-day program, Journalist fellows participated in ideation sessions which helped to generate story ideas that tackle various development challenges and topical issues. Armed with new-found skills and perspective, journalists were then required, subsequent to the workshop, to produce a series of five stories focused on, among other things, developments in open data and the work of the COI, or stories that explore various developmental issues while employing and demonstrating good data journalism practice and techniques.

Over 25 stories were produced during the 8-week fellowship, covering an interesting range of topics and utilizing data.  Some examples include:

Additional details about the program, participating journalists and the stories generated can be viewed at: http://dj.caribbeanopeninstitute.org/projects

The Value of Data Journalism and Challenges in the newsroom

Following the 2013 session, Journalists via the COI’s follow-on survey have noted that while there are no doubt benefits derived from their exposure to Data Journalism, they still continue to experience challenges in applying the principles and practices learnt via the workshop.

Seven of the fifteen surveyed journalists for example agreed that the programme, which was conducted by Panos Caribbean in collaboration with the Caribbean Open Institute (COI), helped them to “develop useful skills to be better able to analyze data and create visualizations” that can command the attention of their respective publics, in print and online.

Even so, while being equipped with these skills to pursue investigative work, 6 of the journalists shared that they have only “occasionally” applied data journalism techniques and tools in their practice since the workshop. Two noted that they use it frequently whilst one utilizes same rarely.

The research further noted that data journalism may not have become entrenched into the media practices of these journalists because there are still a few barriers to overcome, the greatest being a “difficulty in finding quality data sources”, as expressed by four of the respondents.  Other barriers include “a lack of interest and support by newsroom editors and management”; “generally not relevant to local Journalism culture” and journalists “not being confident enough in [their] Data Journalism skills”.

According to one journalist, “While the workshop was very insightful the time period was too short to fully grasp all that is needed to engage in quality data journalism. In addition, there is no real demand for data journalism in the newsroom because of the [slow] turnaround time required for copies.” Another factor that contributes to this delay in efficiently accessing some data is the personnel who safe guard the information with one journalist noting “Government officers are not cooperative and hold data close to their chest even though in [our] country, we have laws that provides for the access for information.

Still other journalists have noted challenges from an editorial perspective as evidenced via comments such as “"concerns about space issues in stories for graphics given the typical story limits"; "scepticism about introducing these new methods and having only one reporter doing work this way" and newsrooms "not willing to link to public domain tools such as Tableau to publish anything online outside their own website";

Barriers aside, the journalists agree that they are willing to incorporate more data journalism techniques and information in their practice and cited:  National Statistics (Census Data), Government Procurement/Contract; Education; Labour Force & Trade; Government Budget; Government Expenditure; Crime and Tourism data as those of the greatest interest and relevance to their work,

As Governments in the Caribbean awaken to the value opportunities of Open Data, bolstered by global Data Journalism best practices there is a flurry of plans and support for implementing open data portals and capacity building around data journalism. The active role of the media remains critical to the vibrancy and health of this emerging Caribbean open data ecosystem. However, a pre-occupation on training journalists without the requisite engagement and awareness building for media managers, editors and decision-makers, is not likely to have the desired outcome.

As Giannina Segnini noted in her fascinating presentation to the Caribbean journalists, it took several years to convince her editors and newsrooms of the merits of data journalism and the value of investing in the human resources and capabilities to build a successful practice. Journalist fellows are therefore being urged to become pioneers and advocates in their own space by sharing the benefits of Data Journalism in line with their fellowship experiences, and start telling their own compelling stories using these new tools and methods. It is anticipated that discerning readers will ultimately take notice and begin to distinguish them from their peers.

Looking ahead, the journalists feedback has assisted the Caribbean Open Institute to better evaluate the effectiveness of the Data Journalism Fellowship program, and to help to inform program design and expectations ahead of the upcoming Data Journalism workshops being planned under the current World Bank's Caribbean open data program, as well as plans currently being made for establishing the “Caribbean School of Data”. With the launch of new open government data portals in several Caribbean countries during 2016, establishing sustainable mechanisms to build data literacy and competencies across the region are critical enablers to realizing the benefits from these investments in open data infrastructure.

About the Caribbean Open Institute

The Caribbean Open Institute (COI) is a regional coalition of individuals and organizations that promotes open development approaches to inclusion, participation and innovation within the Caribbean, using open data as a catalyst. COI is part of the Open Data for Development (OD4D) program that brings together a leading network of partners who work to harness the potential of open data initiatives to enhance transparency and accountability as well as facilitate public service delivery and citizen participation.